The team at Imago is dedicated to ensuring that the print and production of each and every project is of the highest possible standards, both in terms of quality and ethical responsibility. And, in the case of this Peter Pan hardback book co-edition from Coppenrath, plus partner books in this series of award-winning illustrated classics, it was important that FSC® (Forest Stewardship Council) chain of custody was present throughout the process.

The FSC chain of custody certification ensures that this Peter Pan hardback has been produced by an FSC certified printer using FSC materials, which have been checked at every stage of the production process. Additionally, as Imago are FSC certified and managed the entire print and production process, our FSC label was added to the book so that customers can be confident that they are purchasing a genuine, responsibly produced copy.

Since it was first written in 1904 and printed in its first book in 1911, J.M. Barrie’s story of Peter Pan has been reproduced countless times across hundreds of different countries and languages.

The appeal of the story still resonates with children today and the sense of nostalgia it brings for the adult reader lends itself to being produced in a unique and imaginative way. Enter award-winning design studio Mina Lima, the team behind Harry Potter, who have bought their own special stamp to this series of deluxe and collectible tales. 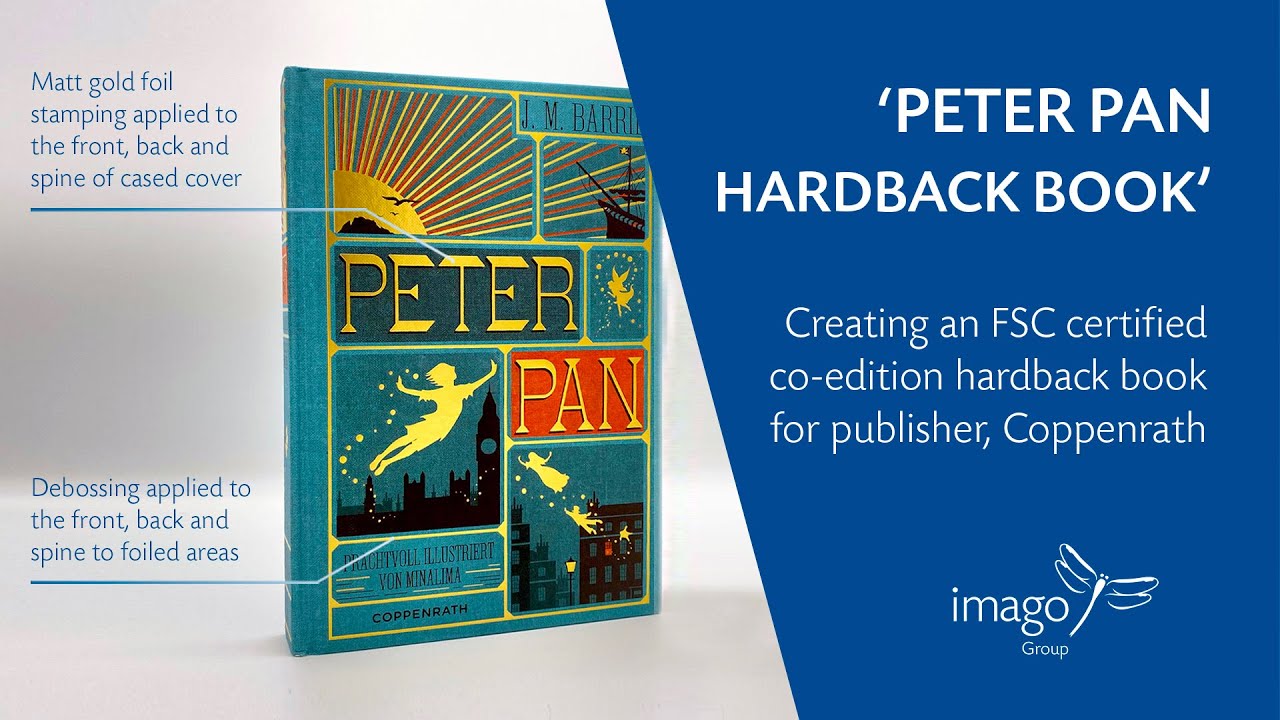 Whilst this Peter Pan hardback has been produced using both state-of-the-art and responsible printing and production methods, the book has been created to pay homage to the look and feel of a treasured classic storybook of a bygone age.

The design of the book is rooted in the traditional design of a collector’s edition that you might find at the back of a quaint bookshop, however, the imitation cloth cover was 4-colour process printed in a rich turquoise with intricate gold foil and debossing. These added a richness that complemented the classic style of the book.

Not only is the outer look and feel of the Peter Pan hardback unique to look at and handle, but the book itself also contains beautifully crafted elements that really set this apart from other editions. Within its interior, you will find the inclusion of ten unique and whimsical interactive die-cut ephemera and inserts to inspire the reader and bring the story quite literally off the page. The majority of these inserts are glued into place at the book’s gutter, however, some are attached by metal grommet so they can spin around.

These added inserts include fold-out maps, spinning compasses, and clocks, plus a plethora of other interactive elements that complement the beautifully printed pages.

To create an authentic antique effect we have printed a full bleed mottled cream background image onto uncoated paper to imitate the look of aged paper. This method is a really cost effective way to achieve the yellowing effect of aged paper as it is part of the 4 colour print.

To replicate the look and feel of a traditional book, which would have been covered in cotton cloth to protect the interior, the cover of the Peter Pan hardback book has had an imitation cloth applied. This outer cover, whilst there to connote an antique style is also produced using a strong, durable paper covering material that is both FSC certified and REACH compliant.

Originally printed by Imago as a US edition for Harper Collins in English, we printed two further co-editions including this German edition for Coppenrath and an Italian language version for publisher L’ippocampo.

Designed by the award-winning design group Mina Lima out of the UK, this interactive Peter Pan hardback book and its partner titles in the series including their co-editions, require the highest quality print and production management.

Other titles in the series include The Jungle Book, The Little Mermaid, The Secret Garden, Pinocchio, Alice In Wonderland, and The Wizard of Oz, all of which follow the same basic specification. The only differences between the titles are the visual design, the extent of the pagination, and the type of inserts included to reflect the story’s content.

As this interactive FSC certified Peter Pan hardback co-edition is printed alongside partner titles and editions on an ongoing basis for a global market, the decision was made to print and distribute from China. Our preferred printers and logistical teams were able to reprint quickly to ensure that the product is on shelves and ready to sell as quickly as possible.

The original production schedule from the final files being sent to Imago was approximately three and a half months for printing and distribution. However, to ensure the process was finalised as quickly and as efficiently as possible, Imago colour proofed ahead of time to ensure that there were no delays when it came to print production. Imago would be delighted to work with you on your next print project. Get in touch with the team to discuss your ideas, no matter how out of the box they might seem!

Enquire Today
We use cookies on our website to give you the most relevant experience by remembering your preferences and repeat visits. By clicking “Accept All”, you consent to the use of ALL the cookies. However, you may visit "Cookie Settings" to provide a controlled consent.
Cookie SettingsAccept All
Manage consent

This website uses cookies to improve your experience while you navigate through the website. Out of these, the cookies that are categorized as necessary are stored on your browser as they are essential for the working of basic functionalities of the website. We also use third-party cookies that help us analyze and understand how you use this website. These cookies will be stored in your browser only with your consent. You also have the option to opt-out of these cookies. But opting out of some of these cookies may affect your browsing experience.
Necessary Always Enabled
Necessary cookies are absolutely essential for the website to function properly. These cookies ensure basic functionalities and security features of the website, anonymously.
Functional
Functional cookies help to perform certain functionalities like sharing the content of the website on social media platforms, collect feedbacks, and other third-party features.
Performance
Performance cookies are used to understand and analyze the key performance indexes of the website which helps in delivering a better user experience for the visitors.
Analytics
Analytical cookies are used to understand how visitors interact with the website. These cookies help provide information on metrics the number of visitors, bounce rate, traffic source, etc.
Advertisement
Advertisement cookies are used to provide visitors with relevant ads and marketing campaigns. These cookies track visitors across websites and collect information to provide customized ads.
Others
Other uncategorized cookies are those that are being analyzed and have not been classified into a category as yet.
SAVE & ACCEPT
Powered by